Ammonium salt ionic liquid is a salt completely composed of anions and cations that is liquid at or near room temperature, also known as a low temperature molten salt. Ammonium salt ionic liquid has a wide range of liquid temperature, good physical and chemical stability, excellent solubility, great polarity adjustment and near zero toxicity, so it has a broad application prospect. In the chemical structure, all four hydrogen atoms in the ammonium ion are replaced by hydrocarbon groups, whose general formula is R4NA, in which four hydrocarbon groups R can be the same or different. In addition, A is mostly halogen anion, including F-, Cl-, Br-, I-. Similar to inorganic salts, ammonium salt ionic liquids are easily soluble in water and can conduct electricity in aqueous solution. 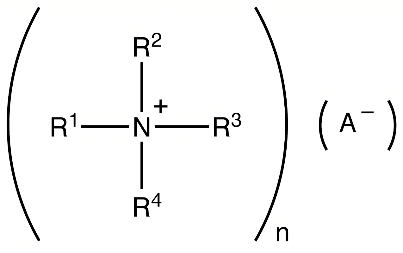